Car Week concludes with a look at one of the most iconic drivers to ever speed across the silver screen: James Dean.

In Rebel Without a Cause, the second of Dean’s three credited films as an actor, Dean played the archetypical angsty teen Jim Stark. After a drunkenly difficult Easter Sunday that landed him in some hot water with the local fuzz, Jim begins his first day at Dawson High School and finds himself also at odds with most of his fellow students – particularly a bully who is, of course, named Buzz.

During a field trip that day to the Griffith Observatory overlooking the city, Jim further antagonizes his new enemies by… uh… existing? Buzz isn’t a very understanding sort of person.

After slashing the tires of Jim’s ’49 Mercury coupe and trying to get a knife fight going, Buzz challenges him to a “chickie run” at Millertown Bluff, setting the stage for the film’s climactic stolen car race. END_OF_DOCUMENT_TOKEN_TO_BE_REPLACED

The poster for Rebel Without a Cause (1955), featuring James Dean as Jim Stark in his iconic windbreaker and jeans.

Sixty years ago today – September 30, 1955 – was the famous fatal car crash that ended James Dean’s life at the age of 24. At the time of his death, he had only completed acting in three films (other than uncredited bit parts), but those performances made more of an impact than anyone could have guessed.

After his breakout role in East of Eden in 1955, Dean quickly followed it up with his performance as the troubled and tortured Jim Stark in Rebel Without a Cause, a representation of teenage angst that gave a glimmer of hope to millions of teens throughout the country who were disgusted by the falsely naive and puritanical state of 1950s society. Teens could actually relate to the frustrated Jim Stark rather than the squeaky clean Andy Hardy or mischievous doe-eyed Beaver Cleaver. Dean’s electric performance captivated young audiences that began copying his style. END_OF_DOCUMENT_TOKEN_TO_BE_REPLACED 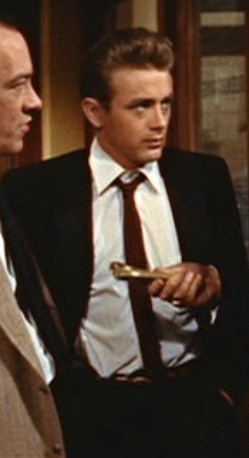 Other than The Passion of the Christ and those of its ilk, few are able to name a film that takes place around Easter. Little realize that Rebel Without a Cause actually begins with James Dean’s drunken loner Jim Stark drunkenly making his way down a suburban street on Easter Sunday evening.

Rebel Without a Cause is groundbreaking in many ways. The story thrusted the issue of suburban moral decay into the faces of deniers that refused to believe their “safe” post-war communities were anything but pleasant. The film also marked the first and last top billing for James Dean, who would die in a fatal car accident less than a month before its release, a sad reflection of an incident portrayed in the movie. END_OF_DOCUMENT_TOKEN_TO_BE_REPLACED