For my birthday today (July 21, same as Ernest Hemingway and Robin Williams), I hope you’ll excuse an indulgent post as I explore the suits that grabbed my attention from a young age and stirred my early interest in men’s style. Though, given the dapper white jacket that Sean Connery wore on the cover of GQ the month I was born, I should have known what direction my life would eventually take!

While not necessarily the greatest suits to every appear in the movies, these five each contributed to my interest in menswear that led to the eventual creation of BAMF Style a decade later. Interestingly, all of the featured outfits are from period films, highlighting fashion of an earlier era (the 1930s, in more cases than not) and accentuated by a musical soundtrack designed to emphasize the character and the moment.

END_OF_DOCUMENT_TOKEN_TO_BE_REPLACED

Now that summer is upon us in the Northern Hemisphere, it’s high time to make sure that you’ve got some duds in your closet that are as appropriate for a day at the office as they are for the sunniest season.

A self-employed gumshoe like J.J. Gittes calls his own shots. As Chinatown is set in 1937, suits were de rigeur for men, but Gittes is hardly the type to rely on the gray flannel suit trope, especially in the sunny southern California locales. END_OF_DOCUMENT_TOKEN_TO_BE_REPLACED

J.J. Gittes begins his final day investigating the Mulwray case in Chinatown with his usual cheekiness, even when surprised by walking into a murder scene. He trades barbs with increasingly suspicious detectives, including the pugnacious Detective Loach (Richard Bakalyan) who inquires about Gittes’ sliced-up nose; Edward Norton’s character in Rounders would pay homage to Gittes’ response of “Your wife got excited. She crossed her legs a little too quick.”

But Gittes’ good humor wears off by the end, following a series of misadventures – mostly at gunpoint – involving sisters, daughters, and a shot-out eyeball. As his assistant Walsh (Joe Mantell) sagely – and now famously – advises him:

END_OF_DOCUMENT_TOKEN_TO_BE_REPLACED 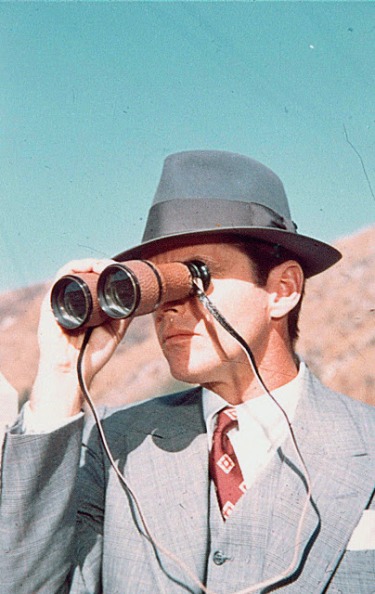 Chinatown begins in the spirit of the best of film noir, with a private eye getting a case promised to be filled with sex and violence and fueled with countless cigarettes and potent whiskey. Gittes, resplendent in a creamy white three-piece suit, accepts the case from Mrs. Mulwray to follow her husband Hollis to determine if he is having an affair.

Hollis Mulwray is the head of L.A.’s Department of Water and Power, so Gittes first tracks him down to a public hearing where Mulwray is at the center of the controversial construction of a dam that would supposedly bring more water to L.A. Gittes is able to learn next to nothing about the man’s sexual proclivities from the meeting, but he does seem surprised that his subject is a mousy, conservative public servant and not a swaggering lothario. END_OF_DOCUMENT_TOKEN_TO_BE_REPLACED 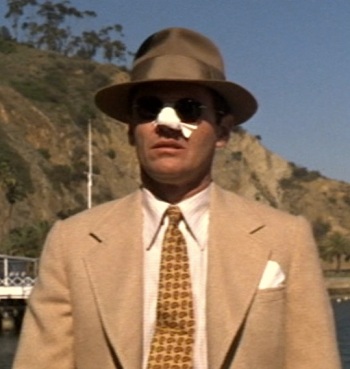 When not donning a more businesslike gray for his investigations in the city, J.J. Gittes shows a clear preference for earth tones. He is seen earlier wearing a cream suit around the office, and he sports a nice sandy brown three-piece when visiting the Mulwray home.

Gittes heads out to Catalina Island to meet Noah Cross, played by a charmingly sinister John Huston, for lunch. Following lunch, Gittes follows tip after tip, taking him from the hall of records to the San Fernando Valley orange groves to a dubiously-administrated retirement home. Nearly each step of his journey is met with increasing resistance, but he is luckily dressed for his long day in arguably his most comfortable outfit in the movie. END_OF_DOCUMENT_TOKEN_TO_BE_REPLACED

Many of the suits Jack Nicholson wears in Chinatown are intentionally loud and showy. As an easygoing yin to the cynical Philip Marlowe’s yang, Gittes happily shows off the fruits of his labors with extravagant and noticeable suits in various earth tones and shades of cream.

However, when it’s time to get down to business, Gittes knows the last thing he needs is to stand out during a stakeout. For this, he has an army of gray suits at his disposal. None of the suits are boring by any means, and they’re only conservative in relation to his other apparel. For client visits and “pubic relations”, Gittes is the flashy PI in brighty-colored suits and shirts.

When Gittes shows up as Evelyn Mulwray’s “knight in shining armor” after her husband’s corpse is found, he is appropriately suited in gray. We’d seen him in gray suits before during his initial investigations of Mulwray, and it’s our signifier that his day doesn’t end with a few quips in front of the hungry press (“Gittes – two t’s and an e!”) Indeed, after Mrs. Mulwray departs, Gittes immediately gets right back to work, investigating the dry river bed and the dams. END_OF_DOCUMENT_TOKEN_TO_BE_REPLACED

Last Friday, I covered the charcoal business suit Robert Shaw wears in The Sting. While it’s a terrific suit for the era, it wouldn’t be very comfortable during warm summer months. For a great summer suit with a ’30s vibe, look no further than Jake Gittes in Chinatown. END_OF_DOCUMENT_TOKEN_TO_BE_REPLACED

While many people – myself included – criticize the ’70s for being tacky with lows such as glam rock, disco, and leisure suits, it was also a renaissance in art, with guys such as Cassavetes, Peckinpah, and Scorsese honing their craft while the Stones put out Exile on Main St. and Led Zeppelin stuck together. Sideburns may have been battling mustaches for facial hair supremacy, but on the artistic front, the ’70s will hardly be duplicated again. The Godfather, The Sting, Network, Annie Hall, All the President’s Men, Dog Day Afternoon, One Flew Over the Cuckoo’s Nest, Three Days of the Condor, Paper Moon, Serpico, MASH, Patton, Bring Me the Head of Alfredo Garcia, and – of course – Chinatown round out the list of some of my personal favorites that were churned out during the decade. END_OF_DOCUMENT_TOKEN_TO_BE_REPLACED