The somewhat awkward triangle of carefree Dickie Greenleaf (Jude Law), his girlfriend Marge (Gwyneth Paltrow), and interloping grifter Tom Ripley (Matt Damon) is made all the more uncomfortable with the presence of Dickie’s outspoken friend Freddie Miles (Philip Seymour Hoffman), who spends the better part of a morning at Mongibello openly mocking Tom. When Dickie doesn’t come to Tom’s defense and, in fact, seems to encourage the behavior, his time grows increasingly limited as his obsessive young houseguest seethes.

Not all of Dickie’s shirts are quite as complexly designed, however, and he joins his guests on this particular morning in a simple white short-sleeved polo shirt, woven in a light diamond-textured cotton with a wide double-layered collar and two-button top.

Dickie also presses into service the trusty comfort of his frequently worn light pink Bermuda shorts, which he’d also worn earlier at home with his white-and-slate panel-front shirt. Per the era’s fashions, these shorts rise high to Law’s natural waist line, where they are tightened into place with side adjuster tabs on each side of the waistband. These double forward-pleated shorts have side pockets, button-through back pockets, and are worn with the bottoms casually cuffed. (Despite how much Dickie seems to favor them, these didn’t fare too well in Bustle’s commemorative piece ranking all of Dickie’s shorts, published in time for the film’s 15th anniversary on Christmas 2014.)

Pink shorts for men are hardly as elusive as they may have been, thanks to brands like Nautica and even Amazon’s house brand Goodthreads, safe chino-cloth offerings for gents looking to test whether pink shorts are right for them but lacking the panache of Dickie’s mid-century shorts with their elegant long rise, pleats, and summer-weight fabric. Available in a variety of colors (though not pink), the Scott Fraser Collection includes Dickie-inspired high-waisted Riviera shorts, naval-detailed with double pleats, side adjusters, and a range of colors in summery cotton and linen fabrics.

As we can’t see Dickie’s feet during this sequence, we can only assume that he’s wearing his usual white canvas slip-on “half-sneakers”, laced through four sets of eyelets but with no back for a comfortable, casual pair of shoes to be worn without socks.

Of course, Dickie took the time to dress his hands with his signature array of jewelry, including the gold-ridged ring on his right middle finger and the gold pinky ring with its gleaming green stone that Dickie received as a gift from Marge and “had to promise⁠—capital P⁠—never to take it off”. He also wears his sleek steel watch with its silver dial and steel mesh bracelet with a single-prong buckle, which has never been positively identified to my knowledge but has been speculated to be a product by Bulova, Hamilton, Longines, Swanson, or Wittenauer. 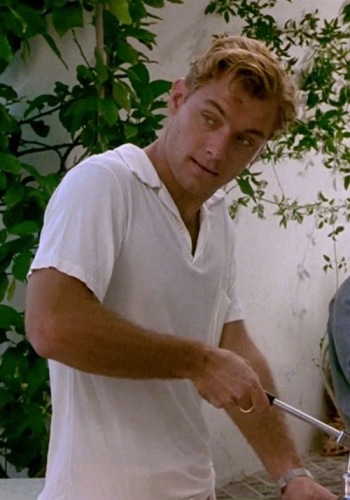 Jude Law as Dickie Greenleaf in The Talented Mr. Ripley (1999)

While more confident than many in his complex knitwear, flashy jackets, and boldly patterned shorts, Dickie Greenleaf also dresses comfortably in relatively simple staples like a white polo and pink shorts, though the subtle details of each add a layer of luxury apropos his status and lifestyle and, like the movie and its characters, reveal that there’s plenty more to see when you examine more closely.

Check out the movie and read Patricia Highsmith’s novel.