Sean Connery and Vanessa Redgrave on set as Colonel Arbuthnot and Mary Debenham in Murder on the Orient Express (1974).

Today is my grandma’s 95th birthday, which she will be celebrating by going to her 9-to-5 job (where she never misses a day!) and then joining our family for a dinner out on the town. One of my favorite memories with Grandma includes Saturday mornings in her kitchen, watching old mystery movies together. This tradition instilled in me a love for the genre as well as an appreciation for classic movies and stars.

Murder on the Orient Express was one of our favorite movies to watch together. Although helmed by the excellent Albert Finney as a charismatic and near-cartoonish Hercule Poirot, the film is also rightly a celebration of some of the most talented women from the silver screen including Lauren Bacall and Ingrid Bergman, who won the Academy Award for Best Supporting Actress from her work in this movie. END_OF_DOCUMENT_TOKEN_TO_BE_REPLACED 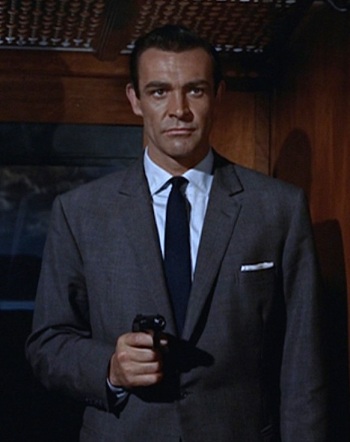 Sean Connery as James Bond in From Russia With Love (1963).

For the 00-7th of October, I want to focus on a nice fall suit while also marking a milestone for this blog; this post marks the first 007 film where each of James Bond’s on screen outfits has been exhaustively analyzed by BAMF Style! Very appropriate too, given that From Russia With Love is my favorite Bond flick and – perhaps coincidence, perhaps not – also features some of my favorite movie suits. (I’m in good company; Sean Connery has also stated that From Russia With Love is his personal favorite 007 adventure.) END_OF_DOCUMENT_TOKEN_TO_BE_REPLACED