The Cincinnati Kid was released today in 1965 with Steve McQueen in the title role as the actor was paving his way to stardom through the decade with a string of iconic movie including The Great Escape (1963), The Sand Pebbles (1966), and finally Bullitt and The Thomas Crown Affair in his banner year of 1968.

McQueen’s timeless sense of cool adds an era-defying quality to his performance as poker prodigy Eric “the Kid” Stoner. The Kid’s simple, functional wardrobe was hip enough to be contemporary to the 1960s while also reflective of the film’s 1930s setting. END_OF_DOCUMENT_TOKEN_TO_BE_REPLACED 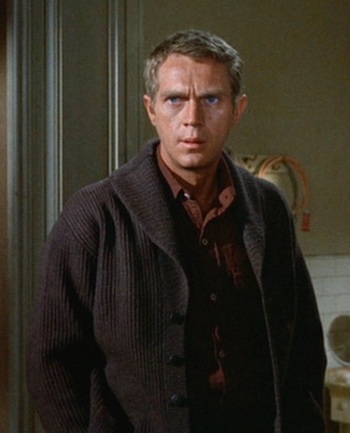 “King of Cool” Steve McQueen could also be called the king of the cardigan, considering his role in re-establishing the sweater as a functional and fashionable garment for young rebels rather than as the staid staple of TV dads like Ward Cleaver.

Both on and off screen, the shawl collar cardigan was a McQueen favorite. END_OF_DOCUMENT_TOKEN_TO_BE_REPLACED

BAMF Style has received a few requests recently to explore the black jacket worn by Steve McQueen as Eric “The Kid” Stoner, a young up-and-coming poker player looking to establish his reputation in Depression-era New Orleans.

When he first meet The Kid, he is holding a hair in the sort of back-alley poker parlor where every guy’s nickname is Buck and there’s enough rusty razor blades in the bathroom that one won’t be missed if there’s trouble. END_OF_DOCUMENT_TOKEN_TO_BE_REPLACED 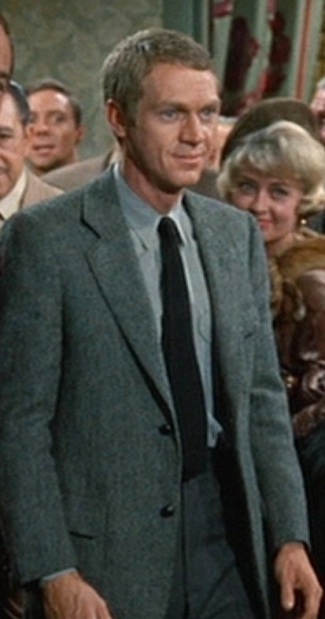 The World Series of Poker started yesterday, hosted by the Rio in Las Vegas. We already had a look at some Vegas cool with Monday’s post, so BAMF Style is gonna examine a look from one of the coolest poker movies of all time, The Cincinnati Kid.

The Cincinnati Kid was Steve McQueen’s first major starring role after kicking Nazi ass in The Great Escape two years earlier, and it also throws him back in time… to the Great Depression, in fact. McQueen plays Eric “the Kid” Stoner, a confident and talented young poker player bumming around the streets of New Orleans from one crooked card game to the next. His life is full of colorful characters including his sweet girlfriend Christian (Tuesday Weld), crooked aristocrat Mr. Slade (Rip Torn), The Kid’s ex-pro buddy “Shooter” (Karl Malden), and Shooter’s sultry wife Melba (Ann-Margret). END_OF_DOCUMENT_TOKEN_TO_BE_REPLACED