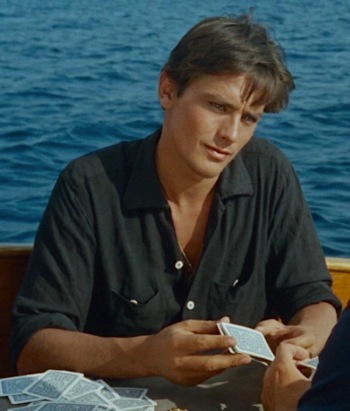 on Mediterranean Sea off Italy, August 1959

As I leave for my annual week at the beach tomorrow, I’ll be hoping to channel the style—if not the discomfort and petty cruelty—of the idyllic-looking, sun-drenched Mediterranean voyage where sociopathic American con man Tom Ripley (Alain Delon) forms an uncomfortable seagoing trio with the brash, arrogant playboy Philippe Greenleaf (Maurice Ronet) and Philippe’s demure girlfriend Marge (Marie Laforêt). END_OF_DOCUMENT_TOKEN_TO_BE_REPLACED

Whether or not you subscribe to the mindset that it’s only appropriate in the Northern Hemisphere after Memorial Day, there’s a strong chance you’ll be seeing a lot more white over the summer months to follow. For gents interested in standing out with a white suit this summer, Alain Delon sets a characteristic gold standard in Plein soleil, itself a paean to elegant summer style. END_OF_DOCUMENT_TOKEN_TO_BE_REPLACED

Today is the 83rd birthday of French actor and worldwide style icon Alain Delon. Born November 8, 1935, in Sceaux, a commune south of Paris, Delon entered the film world during a trip to the Cannes Film Festival shortly after his dishonorable discharge from the French Navy. Attending Cannes with his friend, actress Brigitte Auber, Delon caught the eye of one of David O. Selznick’s talent scouts. A contract was offered, but Delon would later choose to cancel the contract in favor of remaining in France to begin his film career there.

After a few leading roles in France, it was Plein soleil in 1960 that boosted Delon to international stardom. Released as Purple Noon in the English-speaking world, this adaptation of Patricia Highsmith’s 1955 thriller novel The Talented Mr. Ripley starred Delon as the cunning sociopath Tom Ripley, a portrayal that Highsmith herself highly approved of. END_OF_DOCUMENT_TOKEN_TO_BE_REPLACED

END_OF_DOCUMENT_TOKEN_TO_BE_REPLACED 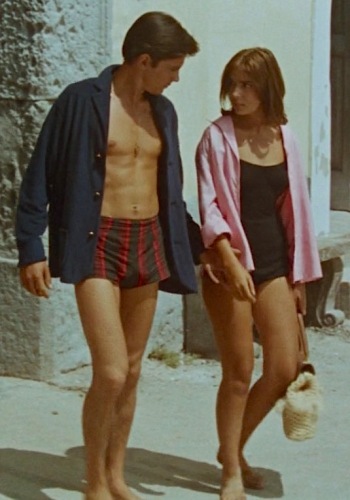 As I’m currently out of town on my annual beach vacation, I wanted to get into the spirit of the summer holidays by looking at swimwear from the movies, beginning with Alain Delon’s classic toweling blazer and swim trunks in Plein soleil, known to English-speaking audiences as Purple Noon.

When Patricia Highsmith’s psychological thriller The Talented Mr. Ripley was first adapted for the big screen in 1960, the author praised the visually appealing cinematography and Alain Delon’s performance as the charismatic sociopath Tom Ripley. END_OF_DOCUMENT_TOKEN_TO_BE_REPLACED

Adapted from Patricia Highsmith’s 1955 thriller The Talented Mr. Ripley, Purple Noon put French actor Alain Delon on the international map. Only 24 years old when Purple Noon was released, Delon earned the endorsement of Ms. Highsmith herself for his performance as the smooth and wily young con artist whose petty crimes and deceptions graduate to multiple murders over the course of the film.

“It’s insidious, the way Highsmith seduces us into identifying with him and sharing his selfishness,” Roger Ebert wrote of both the novel and this cinematic adaptation in his 1996 review. “Ripley believes that getting his own way is worth whatever price anyone else might have to pay. We all have a little of that in us.” END_OF_DOCUMENT_TOKEN_TO_BE_REPLACED