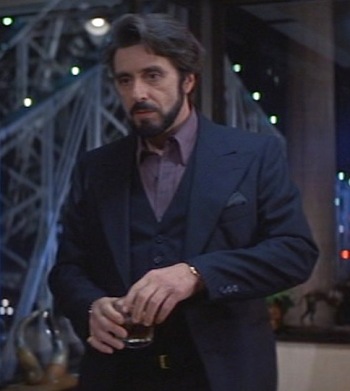 After his parole, Carlito’s “street uniform” is typically a cool ’70s leather jacket in black or brown, but nights that find him hosting in his hot spot –  El Paraíso – call for a slick black three-piece suit. END_OF_DOCUMENT_TOKEN_TO_BE_REPLACED

Carlito’s Way is one of the most popular criminal roles of Al Pacino’s later career. Pacino stepped into the shoes (and vintage leather jackets) of Carlito Brigante, the anti-hero of Judge Edwin Torres’ novels Carlito’s Way and After Hours, which were both adapted by screenwriter David Koepp for the big screen.

Unlike the famous drug kingpin that Pacino had portrayed ten years earlier, Carlito is apologetic and remorseful when it comes to his criminal past, hoping to use his street smarts in legitimate business to set himself up for a future in paradise.

Unfortunately for him, times have changed just a little too much and there isn’t enough room in East Harlem for a former wiseguy looking to go straight. END_OF_DOCUMENT_TOKEN_TO_BE_REPLACED

As the summer begins winding down, BAMF Style is channeling the effortlessly cool attire in warm weather that the men of Magic City showed off in each episode. This Casual Friday seemed like a perfect time for the inaugural post on Stevie Evans, an unapologetic womanizer who still has some maturing to do before becoming securely comfortable in his own role in the world of the Miramar Playa.

Though his role as manager of the Atlantis Lounge makes him little more than a glorified bartender who’s reduced to making a few extra bucks on the side as a pimp, Stevie seems satisfied with his role – and its many perks – until the events of New Year’s Eve 1958 send him down a collision-course with the most dangerous gangster in Miami Beach. END_OF_DOCUMENT_TOKEN_TO_BE_REPLACED 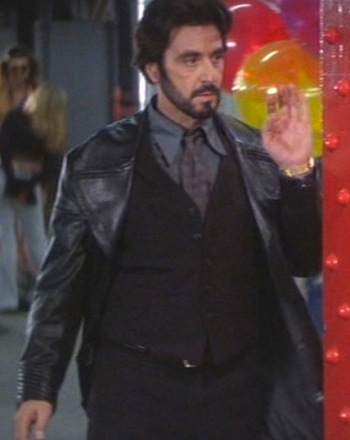 Ten years after the wild success of Scarface, Al Pacino strapped on a gat and stepped in front of Brian De Palma’s camera as Carlito Brigante, the character developed in Judge Edwin Torres’ 1970s crime novels Carlito’s Way and After Hours. Despite its title, Carlito’s Way is primarily based on the latter novel, depicting Carlito’s desperate attempts to “go straight” after yet another release from prison. END_OF_DOCUMENT_TOKEN_TO_BE_REPLACED 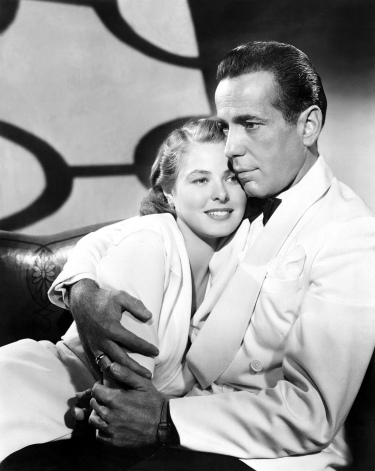 Humphrey Bogart and Ingrid Bergman in a 1942 studio portrait to promote Casablanca.

Although remembered today as one of the greatest romances to grace the screen, the Los Angeles Times‘s Bob Strauss was most accurate when he declared Casablanca a “near-perfect entertainment balance” of comedy, romance, and suspense. In fact, the movie has become so ingrained as a romance classic that few recall just how badass it actually is.

Take the leading man: Rick Blaine. Played by Humphrey Bogart (which already lends plenty of BAMF credibility), Rick is more cynical than any of the private eyes that Bogie ever played on screen. He owns a bar with an illegal gambling den and maintained a successful side racket of running guns to Ethiopia, in addition to packing his own pistol on most occasions.

When Ilsa, the love of his life, walks back into his bar after nearly two years, he takes to the bottle… and he does so with gusto. The bitter Rick refuses to help Ilsa’s crusading resistance leader husband, to which she responds by drawing her own gun. After sorting out conflicted feelings, old flames, and a bullet or two in the gut of a Nazi, Rick finally manages to find closure with his old love while paving the way for further shady business ventures. The end.

With just over a week left until Valentine’s Day, Rick Blaine provides a classic, dapper look sure to make your special lady swoon on this most hated of holidays. Good luck, fellas. END_OF_DOCUMENT_TOKEN_TO_BE_REPLACED

Humphrey Bogart as Rick Blaine in Casablanca (1942), surrounded by friends and foe.

Before Casablanca was released in 1942, Humphrey Bogart had spent the majority of his career in secondary roles as sniveling bastards. His first major role in The Petrified Forest saw him as a Dillinger-esque armed robber far more interested in his six-shooter than romance. He was the foil to Jimmy Cagney’s criminal “hero” in Warner Brothers gangster flicks like Angels With Dirty Faces and The Roaring Twenties, and it wasn’t until 1941 when he finally received star billing in both High Sierra and The Maltese Falcon. The latter film is often considered his breakout role as the cynical P.I. Sam Spade, but it wasn’t until a year later with Casablanca that he would finally be a romantic lead.

The role of Rick Blaine was perfect for Bogie, finally allowing him to develop a romantic depth to his character’s cynicism. Casablanca was never intended to be anything out of the ordinary, despite the cavalcade of stars and writers involved in its production. Many, including those at Warner Brothers, considered it to be a mere copy of the now-forgotten 1938 film Algiers. The film exceeded all expectations and is considered to be one of the few true masterpieces in cinema. It took home the three major production Oscars in 1943 for Best Picture, Best Director, and Best Screenplay (Julius J. Epstein, Philip G. Epstein, Howard E. Koch, and an uncredited Casey Robinson), and shines a contemporary look at World War II. END_OF_DOCUMENT_TOKEN_TO_BE_REPLACED 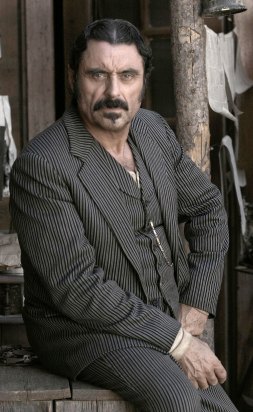 For something a little different, here’s a throwback in honor of vintage badass Al Swearengen from HBO’s prematurely cancelled series Deadwood. If you’re not familiar with Deadwood, you’d be doing yourself a favor to familiarize yourself.

Al’s suit may not translate literally to what looks good these days, but the attitude is there.

Deadwood, one of the most underrated and criminally discontinued shows of all time, was a brilliant ensemble show that reflected larger American themes through the founding of a frontier camp. It featured well-known real life characters such as “Wild Bill” Hickok, “Calamity Jane”, and Wyatt Earp interacting with lesser-known historical figures Seth Bullock, Sol Star, and Al Swearengen. It was the latter that proved to be the breakout hit of the show, thanks to Ian McShane’s masterful performance. END_OF_DOCUMENT_TOKEN_TO_BE_REPLACED