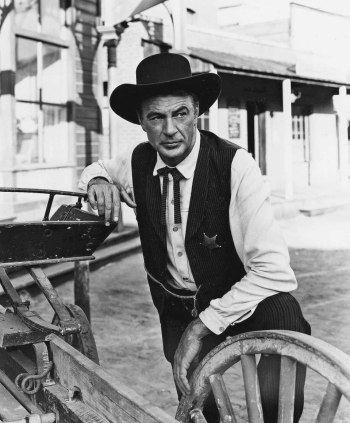 Gary Cooper as Marshal Will Kane in High Noon (1952)

Born 119 years ago today on May 7, 1901, Gary Cooper received his second Academy Award for Best Actor in recognition of his now-iconic performance in High Noon as a laconic lawman whose sense of duty compels him to make a lone stand against a band of dangerous outlaws.

END_OF_DOCUMENT_TOKEN_TO_BE_REPLACED

Following a decorated career in law enforcement that found him bravely and successfully leading investigations and captures of violent criminals, Frank Hamer is not the sort of man who should need a cultural reevaluation in his defense. And yet, it was the most celebrated victory of Hamer’s career—bringing an end to Clyde Barrow and Bonnie Parker’s violent crime spree—that would eventually result in the former Texas Ranger being villianized in the 1967 film Bonnie and Clyde that romanticized the titular outlaw couple to carry out its countercultural message.

END_OF_DOCUMENT_TOKEN_TO_BE_REPLACED

After more than a decade as a rising star, particularly in the genre of Westerns, Clint Eastwood took on the title role in Joe Kidd (1972), an idiosyncratic revisionist Western written by Elmore Leonard that would be one of the last films directed by the legendary John Sturges.

We meet Joe Kidd when he is locked up for poaching on Native American land in the small town of Sinola, New Mexico, on a spring day in 1902, ten years before New Mexico would become the 47th state admitted to the U.S. A former bounty hunter, Joe remains neutral when he is invited to join a landowner’s posse tracking down the Mexican bandito Luis Chama (John Saxon), but he is eventually convinced to join after one of Chama’s attacks hits closer to home. END_OF_DOCUMENT_TOKEN_TO_BE_REPLACED

To commemorate the 39th anniversary of the legendary John Wayne’s passing on June 11, 1979, please enjoy this submission from the estimable pen of BAMF Style reader and contributor “W.T. Hatch.”

I won’t be wronged, I won’t be insulted, and I won’t be laid a hand on. I don’t do these things to other people, and I require the same from them.

The Shootist was John Wayne’s final movie role and no actor, before or since, had a more fitting last appearance on the silver screen. Wayne plays John Bernard “J.B.” Books, the most “celebrated shootist extant,” in turn-of-the-century Carson City, Nevada. The film opens with a montage from the Duke’s earlier pictures providing Books’ background as a gunman and occasional lawman in the Old West. Now the last of his kind, Books travels to Carson City seeking assistance from his physician in what may be his final battle against cancer. This deeply compelling story is revealed as Books confronts the consequences of both his life and his own pending mortality. END_OF_DOCUMENT_TOKEN_TO_BE_REPLACED

Lee Marvin as Charlie Strom in The Killers (1964)

Happy first day of March! The observance of St. Patrick’s Day this month means plenty of focus on the “luck o’ the Irish”, so today’s post explores a suit sporting the “clover lapel”, a soft type of notch lapel named for its semblance to two leaves of a clover plant.

One character who took advantage of this unique but subtle type of lapel was Charlie Strom, the paid assassin who subverts “movie hitman” tropes by letting his curiosity get the better of him… why did Johnny North give up so easily? Bothered by this incongruity, Charlie and his partner Lee (Clu Gulager) set out to find the truth. END_OF_DOCUMENT_TOKEN_TO_BE_REPLACED 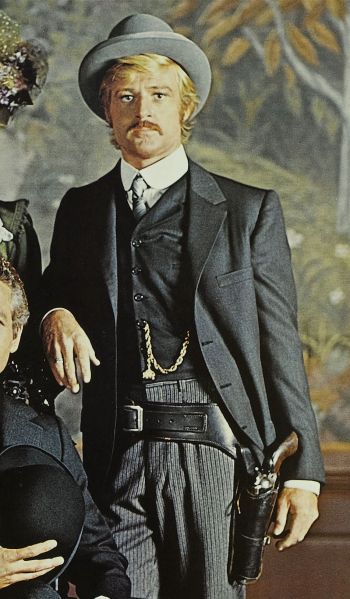 For Western Wednesday, BAMF Style is taking a look at one of the most classic and unique films in the genre, Butch Cassidy and the Sundance Kid.

The film is loosely based on the true story of the turn-of-the-century outlaws who fled to South America after their gang, the Wild Bunch, was broken up by the long arm of the law. William Goldman’s witty, engaging screenplay became a hot commodity in Hollywood once studio execs warmed up to the idea of its Old West heroes fleeing. A veritable “who’s who” of the era’s most popular actors were considered for the titular leading roles before Paul Newman and Robert Redford were cast, cementing their place in film history as one of the most dynamic buddy duos to hit the screen. END_OF_DOCUMENT_TOKEN_TO_BE_REPLACED

Last year, we celebrated Robert Redford’s 78th birthday (and Throwback Tuesday, which I’ve decided can be a thing) by breaking down the Sundance Kid’s traveling suit when he and Butch Cassidy pack up and head to Bolivia. This year, for Bob’s 79th, we’ll look at his main outfit leading up to that – a badass assortment of Western wear that epitomize American outlaw style at the turn of the century.

Although the film’s audience would be hard-pressed to call either Butch or Sundance a true villain despite their criminal vocations, Sundance is certainly the darker-demeanored of the two, reflected by his attire. In Bolivia, he wears a black suit and black hat. While still conducting his banditry in the U.S., he wears all black save for a brown corduroy jacket. By default, he becomes the film’s personification of the “black-hatted outlaw” trope although his easy charm differentiates him from more villianous contemporaries like Lee Van Cleef in The Good, the Bad, and the Ugly.

The one major non-black part of his American banditry outfit is the brown wide-waled corduroy jacket. The jacket looks as well-traveled as Sundance himself, providing him comfortable and surprisingly fashionable outerwear that allows a wide range of motion for a man whose job includes jumping on and off of moving trains. END_OF_DOCUMENT_TOKEN_TO_BE_REPLACED

William Holden as Pike Bishop in The Wild Bunch (1969).

We’ve got to start thinking beyond our guns. Those days are closing fast.

…is what Pike Bishop wisely tells his men, an aging group of outlaws still anachronistically robbing banks and trains on horseback with a six-shooter on their hips. Pike knows the times are changing, and it doesn’t take a water-cooled machine gun or a Mexican general’s Packard to drive the point home to them.

Today would have been the 97th birthday of William Holden, who starred in classics like Sunset Boulevard, Stalag 17, Sabrina, The Bridge on the River Kwai before taking on the role of the anachronistically self-aware Pike Bishop. Holden was one of many actors considered by Sam Peckinpah for the role; Lee Marvin had actually been cast but then turned it down to accept the higher-paying lead in Paint Your Wagon. It turned out well for Holden, who developed the character into one of the greatest movie badasses of all time… as even that sterling news source MTV agreed. END_OF_DOCUMENT_TOKEN_TO_BE_REPLACED 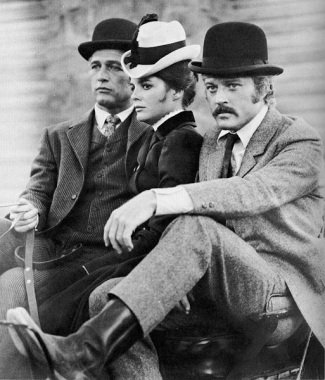 Robert Redford as Harry Longbaugh, aka “The Sundance Kid”, American outlaw and sharpshooter

For Throwback Tuesday (that’s a thing, right?), BAMF Style is focusing on another BAMF hero – Robert Redford, who celebrated his 78th birthday yesterday – in the role that arguably shot his career into megastardom.

105 years ago today, a group of scared and confused law officers surrounded a small boarding house in San Vincente, Bolivia. Inside the house were two tired American men, believed responsible for a score of robberies throughout South America over the past three years. Outside the house stood the police chief, the mayor, city officials, and three soldiers – one of whom was dead.

At 2:00 a.m., the officials heard a man screaming from inside the house. A single shot ended the screaming, soon followed by one final gunshot. These were the last shots fired in a daylong gun battle that had raged for nearly 12 hours. Under the light of the morning, the officials cautiously entered the house and found the two men dead, one of a bullet wound in the forehead and the other with a bullet wound in his temple.

There remains some doubt as to who the two men really were, but they were believed to be the thieves of a mining payroll stolen five days earlier. These thieves were better known to history, and film, as Butch Cassidy and the Sundance Kid. END_OF_DOCUMENT_TOKEN_TO_BE_REPLACED