Jon Hamm as Don Draper, former ad man in search of himself

Moving forward has been the theme of Don Draper’s life, a trajectory made plainly simple at the start of the final episode of Mad Men as a denim-clad Dick Whitman barrels toward the viewers through the desert at more than 130 miles per hour.

Back in New York, Don’s naïve secretary Meredith (Stephanie Drake) shares her concern with Roger Sterling that her former boss may have died, ultimately suggesting that “I hope he’s in a better place.” Geographically, maybe. Mentally, absolutely.

END_OF_DOCUMENT_TOKEN_TO_BE_REPLACED

Today would have been the 90th birthday of Warren Oates, the grizzled Kentucky-born actor celebrated on BAMF Style for his depiction of John Dillinger in 1973’s Dillinger and also his collaborations with director Sam Peckinpah including The Wild Bunch (1969) and Bring Me the Head of Alfredo Garcia (1974). It was this latter film that the iconoclastic director deemed the only one from his three-decade career that matched his original vision.

END_OF_DOCUMENT_TOKEN_TO_BE_REPLACED

Last year, we celebrated Robert Redford’s 78th birthday (and Throwback Tuesday, which I’ve decided can be a thing) by breaking down the Sundance Kid’s traveling suit when he and Butch Cassidy pack up and head to Bolivia. This year, for Bob’s 79th, we’ll look at his main outfit leading up to that – a badass assortment of Western wear that epitomize American outlaw style at the turn of the century.

Although the film’s audience would be hard-pressed to call either Butch or Sundance a true villain despite their criminal vocations, Sundance is certainly the darker-demeanored of the two, reflected by his attire. In Bolivia, he wears a black suit and black hat. While still conducting his banditry in the U.S., he wears all black save for a brown corduroy jacket. By default, he becomes the film’s personification of the “black-hatted outlaw” trope although his easy charm differentiates him from more villianous contemporaries like Lee Van Cleef in The Good, the Bad, and the Ugly.

The one major non-black part of his American banditry outfit is the brown wide-waled corduroy jacket. The jacket looks as well-traveled as Sundance himself, providing him comfortable and surprisingly fashionable outerwear that allows a wide range of motion for a man whose job includes jumping on and off of moving trains. END_OF_DOCUMENT_TOKEN_TO_BE_REPLACED

Today’s post wraps up the first BAMF Style Car Week! I figure there’s no better way to end it, especially on Flag Day, than with the all-American 1970 Dodge Challenger in the archetypal “car movie”, Vanishing Point. 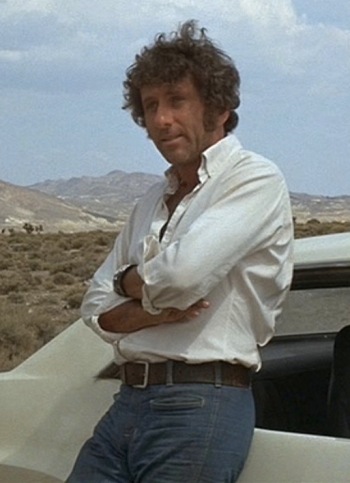 Vanishing Point is the greatest two hour car commercial ever. After I first saw it, all I could think about for months (okay, years) was how much I wanted my own white 1970 Dodge Challenger R/T with a 440 Magnum and a 4-speed Hurst pistol grip shifter.

The screenplay was written by Guillermo Cabrera Infante, a Cuban novelist who based his story off of the true life high-speed pursuit of a California teenager who refused to stop and was killed when he crashed into a roadblock. He added another layer from real life, the disgraced career of a San Diego policeman, and the foundation for Vanishing Point was set. END_OF_DOCUMENT_TOKEN_TO_BE_REPLACED